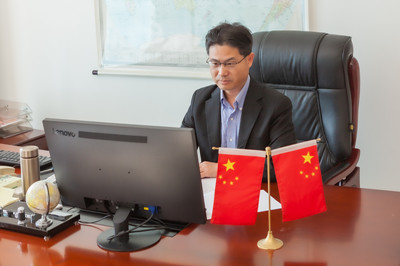 The U.S. House of Representatives passed the so-called Hong Kong Human Rights and Democracy Act of 2019 on 16 October. That is a gross interference in China’s internal affairs again and a full revelation of the U.S. anti-China forces’ political calculations, which attempt to contain China’s development by messing up Hong Kong.

The radical demonstrations and violent clashes have lasted more than half a year in Hong Kong. The damage to the society has expanded, saddening all the people who love and care about this city.

However, instead of condemning the violent acts of those who threaten the safety of life and property of the Hong Kong people, some western countries led by the U.S. publicly or covertly give various types of support to the violent radicals, and try to interfere in the judicial independence of Hong Kong, even obstruct Hong Kong police from bringing the violent offenders to justice. Nowadays, Hong Kong faces the gravest situation since its handover.

Let us repeat our message clearly to the certain countries: Hong Kong is part of China and Hong Kong affairs are purely China’s internal affairs that brook no foreign interference.

During the past 22 years since Hong Kong’s return to China, the Chinese Government has stayed committed to the principles of “one country, two systems”, “Hong Kong people administering Hong Kong” and a high degree of autonomy. Such autonomy is unique and not practiced by subnational units within many federal countries. For example, Hong Kong enjoys the power of final adjudication and pays no taxes to the Central Government of China. Even in the U.S., no state is entitled to such a privilege.

According to the World Justice Project Rule of Law Index 2019, which was issued by a international civil society organization located in Washington, Hong Kong ranks 16th among 126 countries and jurisdictions, while the U.S. ranks 20th. In terms of the Human Freedom Index 2018, the other report which was issued by the Fraser Institute in Canada, Hong Kong ranked 3th and was 14 steps higher than America. We cannot help but ask: what has given the U.S. such confidence to point fingers at a region of another country, claiming it doesn’t have “human rights and democracy”, while the region ranks higher than itself in terms of rule of law and freedom?

We sincerely hope that the U.S. would review what they have brought to the world under the cover of so-called “human rights and democracy”. Nowadays our news networks are filled with stories and images of atrocities in Iraq, Libya, and Syria, etc. These countries with thousands of years of history and once with great infrastructures have been reduced to rubbles. Countless homes are destroyed, and many more people are displaced, being deprived of the most basic human rights of safety and basic living. These are exactly the consequences of the interference to others’ domestic affairs under the disguise of human rights and democracy.

We also sincerely hope that the U.S. would look at itself in the mirror before treating itself as a judge and pointing fingers at others. Don’t forget the strong voices of “We Are the 99%”from the Occupy Wall Street. Don’t forget the casualty of nearly 1,000 shot by American police in enforcing the law in 2017 alone. It is common knowledge that America has never shown any mercy in tackling demonstrations at home. But now this country is slinging mud at the Central Government of China and Hong Kong government for their attempt to restore order. What else can it be but typical double standard?

In fact, the current situation in Hong Kong even has nothing to do with so-called human rights or democracy. The real issue is to promptly end violence, restore order and safeguard the rule of law.

The Central Government of China will firmly support the Hong Kong  government and police in taking all necessary measures to bring those perpetrators to justice and uphold social stability of this city. We also urge the relevant American politicians to grasp the trend of the times, immediately stop advancing the bills, and refrain from meddling with Hong Kong affairs and China’s internal affairs as a whole.

Victor Gotevbe is the Publisher and Editor in Chief of Diplomatic Watch. He is the Managing Director of Conduit Communications Limited.